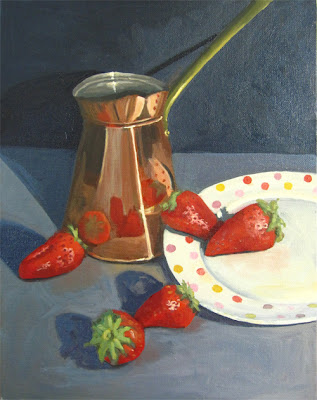 I figured I would wrap up my birthday on a high note.  Just in a couple months I am astounded at how much I have learned, how much I am finally understanding and getting.  I am so excited at how much I have improved so far, but then I am totally humbled by how much I still have to learn.  I've completed 65 (ish) paintings out of the 100 for my goal, but I also realized that in those 100 days, I was counting weekends.  Silly Shelby!

In any case, this painting got me a B+ with just a couple suggestions to be able to take it to an A.  I swear, I have never worked so hard for grades before.  Kind of funny that throughout all of my schooling, and all of the good grades I got, I never had to work as hard as I do for art.  Who would have thought painting and drawing was so technical and scientific?

I love birthdays.  I've always loved them, and my parents did a wonderful job of making sure my birthday was always special.  My husband continued the tradition this year, and I couldn't be more thankful.  I'm surrounded by wonderful friends (all over the globe!) and family.  This support network is not only allowing, but cheering on my pursuit of my dreams.  It is terrifying when you realize you are the only one that is getting in the way of your happiness; truly, once you are in the real world, the only thing standing in between you and what you want to do, is you.  Well, you and your choices.  Granted, if we were back in the US, pursuing my MFA would be much more difficult.  But I was still working on painting in the US, and receiving tremendous support, and even seeing a little success.  There is always a way, if you are willing to make the choices and changes to get there.  So thank you everyone for the support.  It means the world to me, and I am working as hard as I possibly can to be worthy of it.
Posted by Unknown at 6:34 PM 2 comments 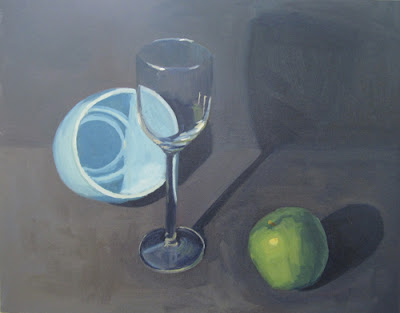 This was my assignment last week, clear glass.  To be honest, it wasn't my best effort.  I was just having a lot of issues, especially with all the ellipses in that stupid bowl.  The wine glass wound up being just a little bit off, but not too badly.  It was mostly that bowl.  Ungh.  But all in all, I'm okay with that, because this week's assignment went really well.  I'll post that tomorrow :)
Posted by Unknown at 6:50 AM 0 comments 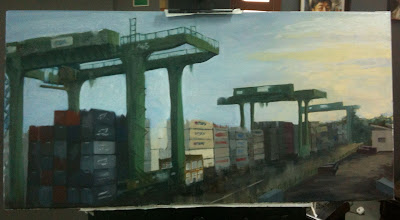 This and my refinery painting are approaching complete.  Still have about 15% left on both of them, but I'm really enjoying the work.  I apologize for the poor white balance and if it is grainy, this was taken with my iPhone, so it isn't the greatest picture quality.  I figured I needed to post something to make sure everyone knew I wasn't totally slacking off :).  But seriously, I have to do 4 paintings by next Wednesday, when I leave for the US for Margaret's wedding.  I can't wait, but I am so totally buried!
Posted by Unknown at 5:54 PM 1 comments 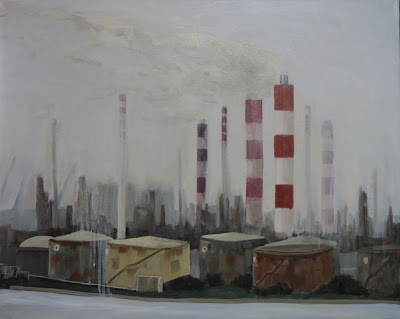 This is kind of the direction that I am starting to take my work that I do in my spare time (when I have it!).  I love industrial complexes and some of the big, huge machinery that you see around Singapore.  Out by where Joe works, there are all kinds of big things.  His entire job consists of climbing up and down big stuff.  The city is tall, with skyscrapers stretching 50+ stories at times.  Heck, we live on the 10th floor ourselves.  Part of me misses and longs for the blues and greens of the Lowcountry.  I miss the rich colors and gentle light of home.  I kept trying to insert them into scenes I saw in Singapore, but it just didn't quite work.
So, instead, I'm working to see Singapore for what it really is, what is really there.  Scenes like this might not initially be bright and pretty, but I feel like they have an inner beauty all of their own.  There is grit, determination, a scrabbling together and resourcefulness that has brought allowed Singapore to be so successful.  Quite often, the sky is either gray and rainy, or so bright that it washes out the colors.  But there is even a beauty within the grays.  I feel like if I can see and find that, I will have succeeded.
Life is good.  What can I say?  Today was just a pretty neat day, and I met some awesome people.  We visited a jewelry school to see a lecture on Kundan jewelry.  This is a traditional Indian jewelry that used rose cut gems, 24 karat gold, and enamel to create some of the most beautiful things I have ever seen.  (Similar to Allison's bracelets that she was importing, but with much more elaborate enamel).  The coolest part - I won the lucky draw, so I get to go back and take a gemology class.  I'm thinking the class about fake gems.  That should help me the best when traveling around, ha!
Posted by Unknown at 2:13 AM 0 comments 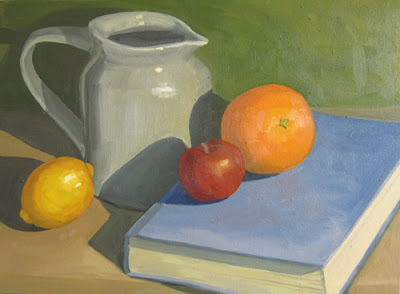 Here is the final 50% of my first project.  In the week and a half since I painted the first 50%, I have learned so much already.  I was very pleased that I was able to carry that into the final part of this painting.   My professor is spectacular, and the other students are intelligent and helpful with all of their critiques.  I love this learning process.  Their biggest critiques about my first submission (shown below) was that the perspective was off on the pitcher's ellipse and the handle needed to be adjusted.  I had also made the shadows in the lemon too cool.
I feel like I really made a huge leap in color this week.  If you look at these two steps of the same painting, I think I can illustrate how.  Look at the fruit.  In the first versions, the color is just off.  Granted, we were really only supposed to show three values, but the apple is kind of dull, the lemon has a shadow that is too harsh and it doesn't look rounded, and the orange is not only too yellow, but the shadow is too blue.  They are just all off.
In order to fix the fruit, I used colors close to the local color, rather than jumping straight to the object's complimentary color.   For example, for the lemon, as it goes into the shadow, I used a dull red as the object starts turning away from the light, and then used a tiny dab of blue.  Before I had mixed up a violet from ultramarine and alizarin, which can be pretty intense, and as you see below, overpower the yellow. 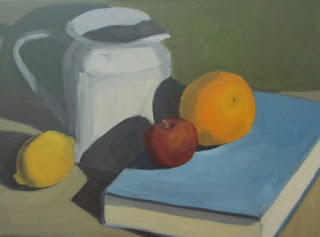 In other notes, I don't think I will be finished with my cityscape this week.  I am learning so much, including how slowly oil dries when you are doing multiple layers!
Posted by Unknown at 5:51 PM 0 comments 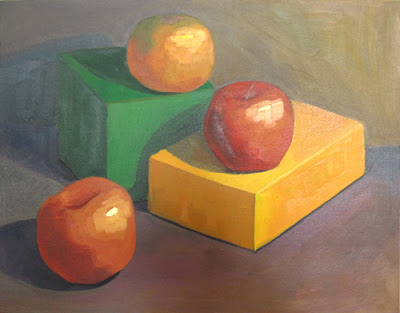 Here is this week's assignment.  I am working on finishing up the project I talked about last week, and I'm also working on a larger cityscape, so I should have some more things to post this week.  With this painting I really tried to get back to basics and work with color.  This was the first week we were really allowed to use a full palette, which is pretty intimidating when you first try to tackle it.  My critiques about colors were such that I really wanted to stop for a moment and really focus on how colors turn through space.  Basically I had been making the shadows on the objects too harsh, too cool.  So my professor was giving some great tips on how to get the object to turn through space.
For example, on a red object, say it is bright red, like the apple on the right.  You almost never use bright red straight out of the tube.  Rather, as the apple turns towards the light, you will use some yellow, since the light source is yellow.  You can't use white exclusively, or your apple will turn pink.  So I used a combination of a lighter red paint, cadmium yellow, yellow ochre and a touch of white.  Then as the apple turns away from the light, the shadow will get cooler than the red of the apple.  Because it is a warm colored object, cooler also means that it will be slightly grayer (not as saturated).  To accomplish this, I used some of the cadmium red light, mixed with alizarin crimson (a very bluish red) and a small touch of viridian (cool green).
I've been having the most problem with yellows.  I was making them entirely too harsh on the shadow side.  In the end, I found a great mixture winds up being a dull yellow from Tera Rosa, Cadmium Yellow Light, Yellow Ochre and a smaaaall touch of Ultramarine.  If you just combine cadmium yellow light and violet (ultramarine and alizarin crimson) it can get too cool too quickly.  You almost have to combine the yellow with a red violet to get (more alizarin than ultramarine) in order to get a good shadow.
I'm working really hard at mixing colors by using the colors next to each other on the color wheel, so they don't turn muddy.  So much thought and science goes into this.  Who would have thought?
Posted by Unknown at 6:50 PM 0 comments