This is a painting from Geylang (I'm pretty sure), the red-light district in Singapore. Doing all these night scenes has really forced me to pay attention to detail. There are so many light sources bouncing around, of so many different colors, you really have to pay attention to which light is affecting which area, and what color it is casting on it. But I love the effects! I'm off to Vietnam today to do some recon work, I'm hoping to get some good reference photos to continue expanding my painting to the rest of SE Asia. Plus, I might stop in one of the tailors and get a dress or two made ;)
Posted by Unknown at 5:00 PM 0 comments

I definitely had some wipe-offs in the past month or so, but things have been progressing well. This is the second successful shophouse that I have done. The hubby and I have also been busy, because we acquired a new studio assistant last week. Meet Jax: 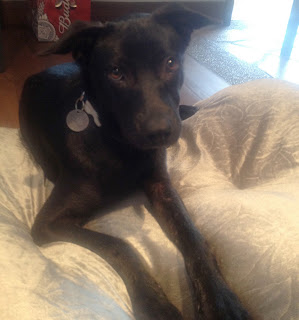 He's a tough one to get a picture of, but when he isn't trying to tell me that my paint brushes need cleaning (no, Jax, no!) he is a wonderfully tempered puppy. Only 6 months old, so there is still a LOT of work to be done, but he seems to have a good base. Nevertheless, he's totally kept me on my toes this past week. I forgot how much responsibility and time a dog takes!
Posted by Unknown at 8:16 PM 1 comments

This is the first painting I did after I got back from home leave and Karin's workshop. Having over 50 colors on my palette has opened an entirely new world up to me that I did not even realize existed. I've really been focusing on  transitioning color; not having any one part of a plane be static. I'm trying to find the colors within the shadows, within the light. It is an entirely new purpose, and very exciting!

This was the last painting I did before heading out to NYC this spring (wow, it took a looong time to post all of these!). This is a lovely corner in Little India, at night.
We just got back from a wonderful weekend in Malaysia for my birthday. We found a place that is completely cut off from civilization. There is no cell phone reception, no TV, no internet. Just some beach bungalows, the beach, a bar, and your tasty beverage - and of course a few friends! In this crazy, hectic place we live, I appreciate being unplugged for a couple of days. It is wonderful to not be bombarded by all of the distractions modern day life can have. When you take away all the distractions, you're forced to interact with people face to face, and find things to do that don't involve computers and phones. We usually re-discover our passion for boardgames. Plus - once we're not all on our phones all the time, that is when we start solving the problems of the world via deep, profound discussions. Because, you know, all the worlds problems are best solved between 12-2am over an ice cold drink. ;)

Happy Wednesday! Here is another nighttime scene from one of the shophouses.
Posted by Unknown at 8:39 PM 0 comments

This shophouse was such fun to paint. This one was totally all about the mood. It was kind of funny, because I originally was worried that this was a sign for a house of ill-repute. To be fair, the sign was in Geylang (the red-light district) and it is RED. But upon asking one of the local artists, who knows Mandarin, he said it was a sign for Korean BBQ. Not exactly what I thought it was. Interestingly enough, the first character, with the kind of T as its backbone, symbolizes horns, like beef, for BBQ (or might have been mutton, I can't remember).
In an everyday life in Singapore note, locals are totally fascinated by how westerners cook with an oven. Ours was broken when we moved in, which the landlord didn't think was a big deal. Ahem, but no. In any case, the owner's handyman, Kelvin, was in here today, uninstalling the broken oven.
Kelvin: "Ah, soon you have new oven, very very good!"
Me: "Yup."
Kelvin: "This oven big! Very big! Very good for you!"
Me: "Yes! Now I can cook whole chicken in the oven!"
Kelvin: "No! This one you can cook TURKEY! Big Turkey! Christmas time coming, Turkey for Christmas!"
Me: "Sure..."
I just find it hysterical that the locals all think we eat turkey for Christmas dinner, and that is apparently why we need these crazy oven contraptions. They really think that the only thing we cook in there is turkey, lots and lots of turkey.
Posted by Unknown at 12:28 AM 2 comments

Singapore has a very interesting relationship with the environment. For example, the island is on the equator, and it does turn into a jungle if left for any amount of time. Nevertheless, the government has cultivated a "garden city" image of endless orchids, palm trees and carefully landscaped shrubbery, giving the false impression of a good relationship with nature. But everything is so controlled that people never go camping, never go hiking (unless it is a guided path with lots of "Don't feed the monkeys!!!" signs on it), they never really experience the outdoors. Which, don't get me wrong, when compared to the woods we trekked through in New Hampshire as a child, the jungle here is pretty intimidating. Bugs are WAY bigger, and snakes are WAY scarier (think verticulating python).

Nevertheless, the government just amuses me. There is a flock of birds that have roosted in some trees on the most expensive shopping district in Singapore, Orchard Road. The birds moved their roost to Orchard after trees were torn down to build a parking garage (and thus more malls). Well, this situation has been deemed totally unacceptable, as they birds, heaven forbid, might be a bit loud. Or even worse, shoppers might wind up a casualty of a bird dropping! So, the government (in conjunction with the Wildlife Authority) is bringing in trained hawks to scare away the smaller birds to a new roost. The only concern? The hawks might turn wild and attack people! Sigh.
Posted by Unknown at 3:30 AM 0 comments

My bad on not posting last week. It has been a crazy week of unpacking and intermittent internet availability. My husband and his friend have been trying to set up something with our internet that will be "incredibly awesome and amazing," at least in nerd terms (my husband is an engineer and loves this kind of thing, although it is lost on me completely). Unfortunately, until it is set up completely, a good portion of the time the adjustments to the system result in cutting off the internet to my computer. The guys are having fun with it, though, so I am behind them.
This night scene was from one of the more colorful districts here in Singapore. I just loved how all of the neon bounced crazy colors off of its surroundings.

We are finally sleeping in our new apartment. I made sure to get my studio unpacked before everything else, so I am at least getting 1/2 days to paint. The rest of the time I'm trying to finish the unpacking for the rest of the house, meeting with the handyman to get things fixed, going grocery shopping, etc. Hopefully we will be fully settled in by the end of the week. Other than that, I am trying to get lots of painting done between now and the end of November. I signed up for the Goodwood Park Fair in both November and December, so I have my fingers crossed that I will be able to sell some paintings!
Posted by Unknown at 10:10 PM 1 comments