Whew!  I finished this just in time for my trip.  This was a commission that for someone here in Singapore.  Kind of my first commission, really, and a total dream, if I do say so myself.  The patron just said he wanted a painting of "something having to do with Emerald Hill, but no pressure.  Please paint however or whatever you want within XX budget."  Seriously.  Who could ask for anything better?  In any case, I actually had a really tough time getting to this place.  Initially I tried a couple other compositions, and they just fell totally flat.  Then I saw this building.  At night time it is closed while all around it local bars are hopping.  But because of the lights hitting the bright colors at night, it kind of steals the show.  I had a ton of fun with this one.
Posted by Unknown at 3:22 AM 3 comments 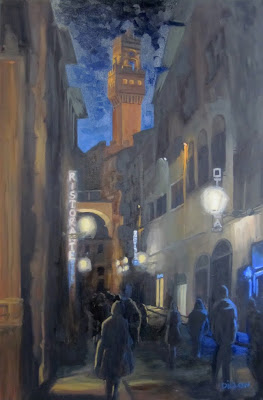 I am finally finished with my semester.  Time to start packing for the US! This was a scene from Florence, right after the sun was setting.  The sky was a phenomenal electric blue, against the orange of the tower.  Just spectacular.

This project was a doozy.  I think I've learned a lot about myself in the past couple of months, especially when doing this project.  This is 24x36 inches, the largest I have worked so far.  I think I much prefer smaller paintings.  I really love being able to knock out one, if not more, paintings in one sitting.  Doing a larger one, maybe 18x24 every now and then is a nice change up, but I don't think I'm going to make any kind of habit out of it.  Plus, it is much more difficult to ship larger paintings from Asia.  :)
Posted by Unknown at 5:23 PM 1 comments


This was a nice little side painting to do for class.  I've been getting a bit weary of the shophouses.  Sometimes you need a break when doing the same subject over and over again.  In any case, this was the view from the villa we visited in Tuscany on our wine and cooking class tour.  My husband learned how to "swirl" wine properly and make a mean ravioli from scratch.  Mmmmm. Yum.

This weekend I had another twilight zone experience.  As I was walking up the back road to the studio, I saw this dumpster: 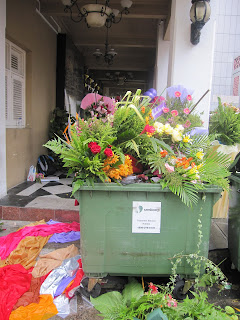 Only in Singapore is everything so perfectly manicured that even the dumpsters are overflowing with flowers, right?  Ha! Well what happened is that when a new business opens, moves locations, etc, (especially if it is run by important people or is influential), lots of clients and vendors and other business owners will send a professionally arranged bouquet as congratulations.  These bouquets are usually HUGE.  They're usually on these big stands that make the bouquet as tall as a person, and two to three feet wide.  Well, this wedding coordinator had its grand opening, and what you see in the picture is just what they couldn't fit on the sidewalk in front of their front door. 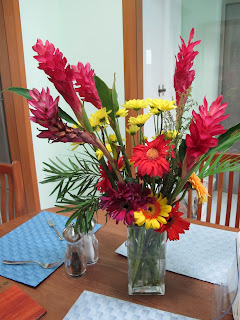 Being my mother's daughter and loving flowers, I decided to go dumpster diving.  Yes, yes I did.  If I do say so myself, the results were pretty fantastic.  It hurt my soul to see such beautiful fresh flowers just thrown away so callously.

Like I've said before, I really enjoy these night scenes.  This is one of the signs in Geylang, the "red light" district here in Singapore.  I dragged my husband up there one night to take pictures and somehow lost my memory card.  Somewhere in between taking out the old one and putting in a new one, I managed to drop the old one, in the dark.  We even busted out our handy dandy iPhones with the flashlight apps and walked the 10 ft where it must have dropped out over and over again.  And let me tell you, a little ang mo (white) girl basically crawling up and down on her knees on a side street in the red light district is not something the Bangladesh and Malay day laborers are used to seeing.  It was pretty amusing.  One gentleman was kind enough to ask if we needed help, but I think he was just totally perplexed by the situation and was curious.  In any case, the memory card was lost forever, but luckily I had backed it up.  I bribed the hubby with a big bottle of Tiger (the local beer) and all was forgiven.
Posted by Unknown at 4:11 PM 3 comments

I'm having another welcome to Asia day today.  I leave for Karin Jurick's workshop in NYC next friday.  So, in preparation for this workshop (which requires like 50 different colors of paint), I ordered my supplies nice and far in advance - from the US.  I can't find most of the brands here or colors here, and even if I can, they're much more expensive than in the US, so like I've done several times before, I was going to have them sent via vPost.  vPost is great, it is a branch of the Singapore postal system, and they have an office in Portland, OR.  You buy something online, have it shipped to this office, then vPost ships it to Singapore at a MUCH discounted rate.  It can just take a while for the invoices to get processed, etc.  Which is why I ordered my paints well in advance.  A month is enough time, right?  Wrong.
For the past week I've been back and forth with them about the invoices for my two packages.  I don't know what in the world is going on, but I keep getting notifications that say I haven't submitted my invoice (I have, three times for each box now).  The even better email that I keep getting is that they got the invoice, saw "artist oil colors," freaked out, and think I'm trying to send semi-combustible house paint in a plane.  ARGH.  By the way, I've also sent the MSDS info several times to them.  So far I've not received any information back from them, and I can't seem to get in touch with anyone on the phone (surprised?), and I leave for the workshop in a week.  I have no clue what I'm going to do, I guess maybe I can re-order the supplies and have them delivered to one of the people in NYC.  Welcome to Asia.

I've really enjoyed spending a lot of time seeing houses during different times of the day and being able to capture the the different moods.  This is the the same house as in No. 37 (click here to see) only at night.  It goes from being such a bright, happy house to something really interesting and moody.  I love the colors here at night.

I hope everyone had a wonderful Mother's Day!  Both my husband and I had the entire weekend off, which was absolutely glorious.  Literally, neither of us have had two consecutive days off on the weekend since January 1.  So we spent most of the weekend at BBQs and lounging in the sun by the pool.  Love it!

I thought this house was really interesting.  Also nestled right outside of Little India, this is about three houses down from the incredibly ornate Rococo houses.  I really loved this one because against the bright blue sky, it almost looked a bit like something out of the southwest.  Sort of like a mesa rising out of the jungle - ha!  The really interesting part is that the bottom 2/3 of the house (which aren't in the painting) are just as elaborate as the rest of the street.  This guys is having a bit of an identity crisis!
Posted by Unknown at 5:16 PM 0 comments

I'm still just totally drained and having a hard time painting.  Thank goodness I have already completed some of these for the show.  Every time I step in front of the canvas and try to touch paint to it, I seem to just mess it up.  Running a brilliant streak of wipe-offs, if I do say so myself.  Part of that is that I've been trying to give myself a break from the shophouses recently.  I'm a bit burnt out on them, to tell you the truth.  I've finished 79, another 21 to go in my 100 series, but since my daily painting journal is only on No. 48, I have a bit of backlog left. :)  Here's to hoping that I can get in a good rhythm soon.

This is another really neat Rococo shophouse just outside of Little India.  It is actually probably 5-6 shophouses, but they all have the exact same design motif and coloring.  This is one of the more unique ones that I have found here.  I think the round windows are really cool and different.  The color scheme on the house is also a very interesting one.  It is a combination of a light sea green and a raw sienna kind of color.  Very Art Nouveau in coloring.

As an aside, I had something totally weird and random happen to me this morning.  I was out on my morning run, just drenched in sweat, in workout clothes and clearly huffing and puffing (I was on my walking interval), when a local guy runs up and sort of walks slightly ahead but next to me.  He stops all of a sudden, kind of turns around and asks me something.  I have my headphones on, so I can't hear.

Now, the first weird thing about this is that locals just don't randomly talk to expats on the street.  It's very much like NYC that way.  Not so aggressive, but if you try to say hi or talk to them, you get very strange looks most of the time.  It's very much a self-contained society where you keep to yourself and don't talk to strangers.  Once you have a common ground of some kind, (like in my art studio) people are super friendly and talkative, but on the street - not so much.

In any case, I can't really hear him, I figure he's asking for directions.  He's kind of nervous and mumbling and holding his cell phone like a security blanket.  So I take out the other earphone and ask him to repeat what he just said.  "Oh um, can we exchange contact info, like phone numbers, so that we can be friends?"

At this point, I'm so weirded out by the fact that someone actually stopped me on the street to talk to me, much less ask for my number in a very 6th grade kind of way, that I think I just mumbled no and ran (it was time for my running interval) off.  It was just very strange.  Best my husband and I could figure is he was maybe dared by some friends or something.  Guys just don't go up and approach women here, much less foreigners.  In any case, I thought you might enjoy one of the strange daily occurrences that happen when you live abroad.
Posted by Unknown at 6:35 PM 2 comments

This is a lovely little "wedding cake" house in Joo Chiat.  Lots of white on white moulding, creating a very sublime, mellow palette.
Posted by Unknown at 2:04 AM 0 comments